This morning I received an email from a teacher who simply wanted to know a bit more about emojis. And it occurred to me that it just might be the sort of thing that others may want to know more about as well, especially for anyone who is not a technology "native".

Emojis are little picture characters that are often used to express an emotion. Not surprisingly, they originate in Japan. There is a long list of "official" ones from the Official Unicode Consortium, but many apps and sites have their own.

Google and Android have their own set that are unique to their product line. Here are some examples:

Within Gmail, I was able to add them to this message via the smile icon below in the composition window. 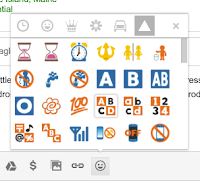 ​
There are six "Categories" across the top that are used to organize them. To insert them into my message, I can click on the emoji that I want to use and then it will appear in my composition window. I can then drag them to where in my text I want them to be place.

Emojis can be an easy way to "tell" the recipient something without using words or when words would not sufficiently explain them or would simply be longer than necessary. I often you a thumbs up  when messaging my friends and family to acknowledge their message instead of saying ok (this is especially easy with Facebook as they have it as a built in feature to their messaging system).

That being said, I recommend using emojis sparingly and not going too crazy with them. Much like people get tired of the over use of hashtags (I'll have to blog about those, too), emoji filled messages can also be a source of frustration for those who don't want to look at a sea of little pictures to understand what you are trying to say.

I hope that makes sense!

Do you have something related to all this technology that you've always wondered about? Feel free to ask me via the comments on my blog and I'll write more articles this this one.

Nearpod has been creeping under the radar since last year and it hasn't been on my list of frequently chatted about tools. But it is really handy for building engaging lessons and presentations online. I just got an email from them and they are giving away 24 of their top lessons FOR FREE ! It is worth checked out their list and grabbing any that have to do with your content area before you run out of time. Need to create a Nearpod account to grab them now? Go to this link to create an account first ! Nearpod Loves Teachers!
Read more

I had a teacher ask me if there was a way to hide or remove students who are no longer in your class. The answer is maybe. It depends on if they are officially dropped from your class and appearing as red in your roster and gradebook. If not, then no, you cannot remove them until they have been unenrolled from the class. If the student is showing up as red in your gradebook though, you can hide them so you don't have to worry about them. Here is a screenshot to help you do it:
Read more